Obituary for Irene May Benson 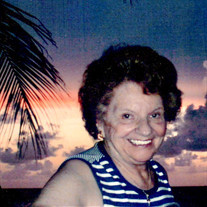 She was born on December 5, 1922 in Maspeth, New York, to Edward Pazderski, Sr. & Michalina Szymanski and had 4 brothers (Edward, Jr., John, Eugene and Alfred) and 2 sisters (Florence and Elinor). Her family was Roman Catholic and her aunts and uncles on her mother’s side all served the Church as priests and nuns.

She met the love of her life, Clifford L. Benson, through her sister, Elinor, who was dating his best friend, Austin. The first time she saw him, he was asleep in the back seat of the car, since he was home on leave from the Coast Guard and she said it was love at first sight. They were married in June 1943 and Clifford left for the War in the Pacific just months afterwards, and didn’t return home until their first son, Dennis, was almost a year and a half old. They were married for almost 53 years, until his death in May of 1996.

Cliff & Irene had their second son, Richard, in New York, also, and then moved to Miami in 1948, where three daughters (Diane, Karin and Kristine) and a son (David) were born.

Irene cared for the home and was ever-present as a mother, involved in her children’s lives and education. She taught by example and lived a life of being there for others - caring for her own mother & father until their deaths and also for many neighbors and friends. She continued to keep in touch almost daily with all 6 children throughout her 97th year, as well as with extended family and her childhood friend of 87 years. Her son, Richard, lived with her and was a loving son and caregiver. She was also blessed to have Gwen & Debbie as companions for the last five years.

Irene taught us all the value of learning and knowledge - and she continued to challenge herself with new technology, enjoying her iPad & her Google Home to look things up and stay connected.

Irene was predeceased by her parents, and her brothers and sisters and her husband, Clifford. She is survived by her sons: Dennis, Richard and David; and her daughters: Diane, Karin and Kristine, 5 grandchildren: Erika, Gregory, Ashley, Nathaniel and Andrew, and 2 great-grandchildren: Andrew and Anthony.

A funeral mass will be held at St. Margaret Mary Catholic Church in Winter Park, Florida and later she will join her husband, Clifford, with a burial at sea.

Want to get notified whenever we write about DeGusipe Funeral Home & Crematory ?

Sign-up Next time we write about DeGusipe Funeral Home & Crematory, we'll email you a link to the story. You may edit your settings or unsubscribe at any time.